"TRANSPOLYBLU: A Digital Exposition," Elliot Smith Contemporary Art, Saint Louis, MO, co-curated with Ron Laboray. A major exhibition of works by over twenty artists from around the United States who use the computer as part of the image-making process.

"A Box," Marsha Mateyka Gallery, Washington, D.C. An exhibition of paintings and sculpture by eight artists working in New York, Illinois, and California.

The inspiration for the exhibition is a poem by Gertrude Stein, entitled, "A Box":

Out of kindness comes redness and out of rudeness comes rapid same questions, out of an eye comes research, out of selection comes painful cattle. So the order is that a white way of being round is something suggesting a pin and is it disappointing, it is not, it is so rudimentary to be analysed and see a fine substance strangely, it is so earnest to have a green point not to red but to point again. Artists include: Emily Cheng, Michael Byron, Cheonae Kim, Linda Besemer, Linda Day, Sally Elesby, Dana Duff, and Shirley Tse.

"an accumulation of simple solids," Co-curated with Jacquie Littlejohn. Littlejohn Contemporary Art, New York, New York. An exhibition of painting and sculpture based on quirky perversions of the grid.

This exhibition continued to blur boundaries between categories and challenge the rhetorical impulse. The works focus on the use of language and its marriage with material that alters the original text, creating an alternative territory that prioritizes the "texture" of the object.

This exhibition features the work of current graduate students at Art Center College of Design and California State University at Los Angeles, within the context of a shopping mall. This exhibition explores the issues of home and territory -- physical and psychological. Primarily installation art, the work engages in a dialogue between the traditional notions of habitat and the personal interpretation of private and social space. The exhibition comments on the nature of domestic space.

The title for this exhibition is from an essay by Maurice Merleau-Ponty. This exhibition consisted of works that investigated aspects of light and reflection, some metaphorically, some literally, some phenomenologically, pointing to a politics of space -- a pluralism of vision and a criticality of dominant single point of view.

An exhibition based on the idea of fluidity as a dissipation of the boundaries between things. The concept of flow creates critical space that denies the discourse of polarity that is at the core of Western thought. The title of this show is the opening poem from Gertrude Steinâs "Tender Buttons." The use of Steinâs poetry reiterates a state of "between-ness." The artists in this exhibition all articulate a criticism of the static through the use of a wide variety of mediums. 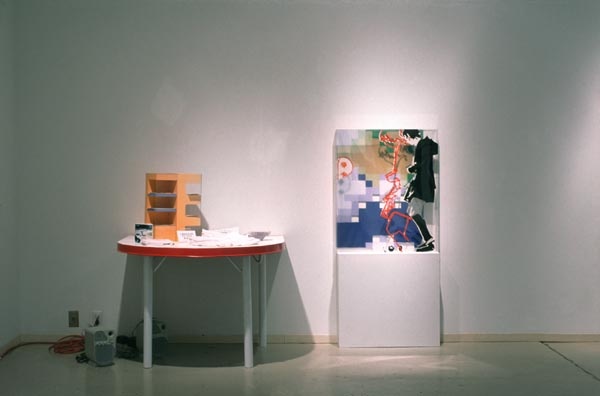 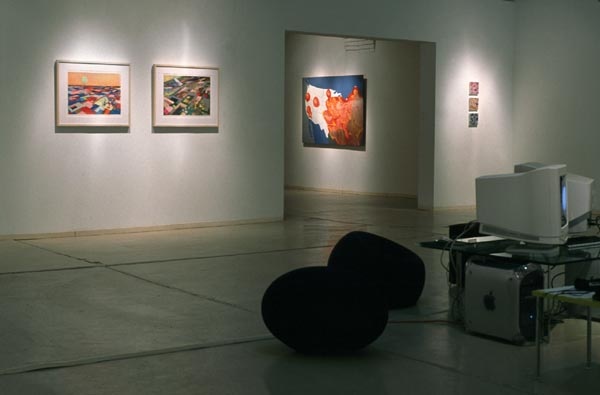